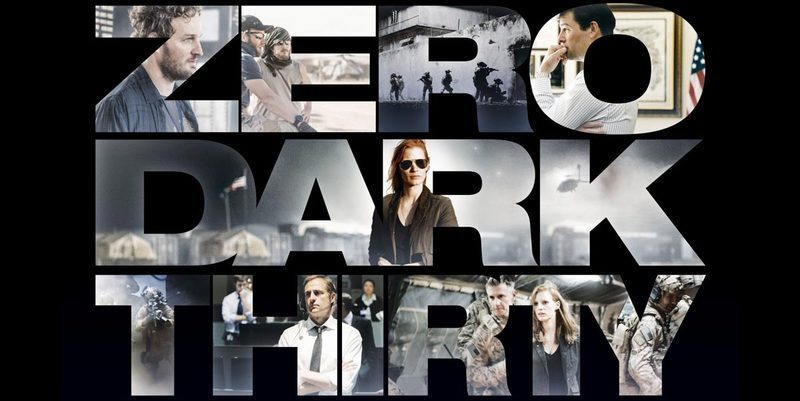 Zero Dark Thirty is a historical, drama, political thriller written by Mark Boal and directed by Kathryn Bigelow of The Hurt Locker fame, a movie about a grossly irresponsible, reckless, rogue sociopathic leader of a  U.S. Army Explosive Ordnance Disposal unit who, in reality, would never have been allowed in the military in the first place.

The movie has been nominated for 5 Academy Awards:

We are reminded of the events of Sept 11, 2001, as we are greeted with a black screen with accompanying sound effects of the disaster and phone-calls made from people within and surrounding the twin towers to emergency services. Flash forward to 2003, and we are introduced to CIA operative ‘Dan’ at a black site in Pakistan, as he goes about his job, routinely performing intimidation and humiliation tactics, including ‘enhanced interrogation’ methods such as torture, on a detainee who is suspected to have links to several Saudi terrorists.

Going outside for a break, one of Dan’s teammates removes their balaclava and reveals themselves to us as Maya (played by Jessica Chastain of Lawless fame) a  young and very beautiful CIA officer specialising in intelligence related to Osama bin Laden, leader of al-Qaeda. Maya has recently been reassigned to the U.S. embassy in Pakistan to work with Dan.

Soon, thanks to interrogation methods such as water torture and positive reinforcement, the pair trick the detainee into sharing details of an old acquaintance who works as a personal courier for the world’s most dangerous and wanted man, Osama Bin Laden, where wackiness ensues!

The war on terror is a nebulous one, battling against an ideology rather than a known and quantifiable threat. Terrorist cells and their activities are extremely difficult to engage and calculate. The enemy is unidentifiable and, should one bring a Terrorist Leader to Justice, what guarantee is there that that would deal a blow to a long held and religiously based belief?

Osama Bin Laden was promoted as Public Enemy Number One 2 or 3 days after September 11. His eventual death by a US Navy Seal’s Team during a night raid of the compound was publicised as necessary: at the time of his death he was living in seclusion within a compound with several children, and was reportedly wielding a weapon while at the same time hiding behind two women, who were also armed, treating them as human shields.

After being shot dead, an image of the dead body, captured by a digital camera, was thrown around the world. Very quickly his body was apparently adhered to by Osama’s custom and was buried at sea. It was only relatively recently that we found out that Osama was shot as he appeared around a bedroom door within a compound. Once the army personal opened the door did they find two women, with only one rifle present in the room, which was attached to an opposing wall.

A similar story was attempted to be spun at the end of hunt for Suddam Hussein: Once Saddam was revealed to be hiding in a crude dug-out, we were told that his long, shaggy greying hair and beard were fake, a deliberate spin to dissolve any sympathy we may have felt for such a character. Saddam was handed over to his former people for ‘justice’, and, after a trial for the atrocities that he was responsible for during the time of his dictatorship, Suddam was found guilty and hung.

We assumed that the search for Osama Bin Laden was to take him to justice, to humanely try him in a court of law, having him answer to the many charges of acts of terrorism ordered and executed by him. In a bid to capture Osama, it seemed that he was killed in self-defence: wielding a weapon while hiding behind a pair of gun-toting women. Where the new official story presents an order to kill Osama Bin Laden, the movie Zero Dark Thirty makes no bones about it.

Zero Dark Thirty presents the use of torture, especially water-boarding as a necessary, if not essential method for gaining the crucial information that lead to the capture and death of Osama Bin Laden, with the beautiful red-haired Jessica Chastain bought in to spear-head the mission to make absolutely sure that we buy it.

Jessica Chastain, last seen as the damsel in distress in  Lawless, which attempted to have us empathise with a family of moonshine bootleggers, selling their wares to mobsters in Chicago, is used here to gain the audience’s empathy as she introduces us to the various torture methods that led to finding Osama Bin Laden. At first quietly affected by the depictions of torture in front of her, and us, we witness her arc from quiet, studious but dedicated researcher, warming up to the idea of using torture as an essential technique to find the one who is responsible not only for the atrocities of September 11 and countless other acts of terror, but out-of personal revenge for the killing of her close professional college. All this amongst the ‘irritating’ Obama administration banning  the detainee program, allowing untapped detainees to become ‘lawyered up’ and annoyingly exercising their human-rights.

Jessica’s Maya is progressively shown to be a lone character of common-sense and great intelligence amongst a sea  of incompetent, indecisive middle-aged bureaucratic men.  Thank god for James Gandolfini’s character who flatly recognises and states to a college that “we are all smart”. Lines delivered by a frustrated Maya include stating in a high level meeting that “I’m the Mother F-er who found him”, and then proclaiming that she is  “100% confident. Oh hell, I know how terrified you are of absolutes, 95% confident”. Such lines are a betrayal of any type of authenticity the movie had attempted at this point to have built.

Zero Dark Thirty would have worked adequately as a procedural thriller, a la Fair Game, which brought us the world of political meetings with shaky cam to liven everything up. Like Snowtown, the characters would have worked had they operated as their functions, representing the unfolding of actual, factual events, leaving it up to us to project their motivations and characters onto the dry slates, serving as our filmic cyphers: how would I feel in that situation? What would I be thinking if this happened to me? This may have been quite ‘dry’ when compared to traditional drama-actioners, however the political machinations themselves, if handled correctly, would have been quite fascinating to watch.

Zero however attempts to go further and attempts to flippantly inject unnecessary personality, vague backgrounds and characterisations to characters which up until a point, had served as functions as representative of the known facts. Now trying to have characters relationships suddenly intertwine to deliver emotional connections to cash-in-on later for the movie to also serve as a dramatic thriller, at this stage it is too late, and it doesn’t go deep enough. It is enough that Jessica Chastain’s character is motivated to find OBL after Sept 11, and to adequately fulfil her employment specifications rather than making it personal and henceforth, making ‘stuff get real’.

The finale however, which is used extensively in the movie’s trailer, is filmed brilliantly, and sticks pretty close to the new, official report – think a real-time war-zone Blair Witch Project.

After the events of September 11 a few films were released dramatizing the factual situations of those on-board the hi-jacked planes bound for the Twin Towers (United 93), the efforts of emergency crews in helping survivors (World Trade Centre) and even a controversial, arguably gratuitous cheap dramatisation involving Robert Pattinson (Remember Me). Whereas Jamie Foxx’s The Kingdom delved into the morality, motivation and circular vengeance in fighting the war on terror, none have so far really delved into the raw political context.

Reportedly, the director and screenwriter worked very closely with the CIA in regards to the ‘facts’ of the investigation, justifying the use of torture during the war on terror as a reliable method of extracting reliable data. A serious subject that should not have been given as much creative licence with the facts as allowed here, regardless if it is faithfully re-telling the story as told by the very self-interested CIA.