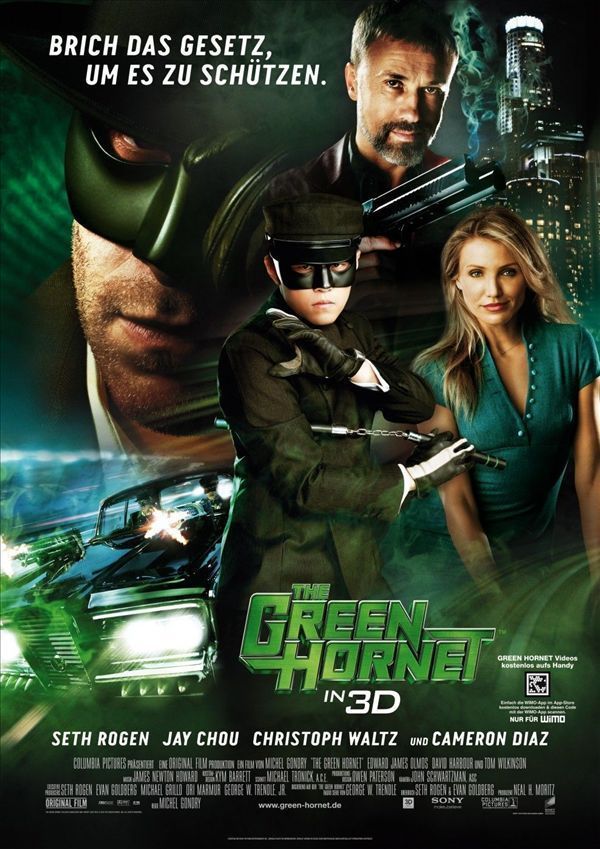 The Green Hornet is a 3D movie based on the 1930s radio show and 60’s television show, directed by Michel Gondry.

We are introduced to Kevin Smith-like playboy slacker Britt Reid (played by Gen Y’s comedy slacker Seth Rogen ) who is the son of James Reid millionaire publisher of the Los Angeles newspaper The Daily Sentinel (played by the always awesome Tom Wilkinson). Once his father is found slain by an allergic reaction to a bee's sting, Britt finds himself at the head of a publishing company that he has no-idea how to run. After a burgeoning friendship with his father’s genius mechanic Kato (played by Asia super-pop-star Jay Chou), and an impromptu rescue mission of a damsel in distress, the duo decide to dedicate their lives to rid their city of gang-related crime, where wackiness ensues.......................

The movie is surprisingly very funny. I could not help but laugh at the improvised comedic delivery of Seth Rogen as he plays his child-like exasperation reacting off of the radiating, effortless coolness of Kato. Seth’s energy and enthusiasm is enough for us to empathise with Kato: it is easy to see why such a straight-laced genius would fall for Seth’s enthusiasm and be allowed to be swept along for the ride as his side-kick / partner. The child-like wonder is akin to Adam Sandberg’s The Lonely Island’s frenetic amazement that they have winded up on a boat! This is a gag that is used throughout the movie, let alone the Green Hornet mythology itself – if Kato is the one literally doing all of the footwork, what does he need the Green Hornet for? The relationship is well established in the movie as it is shown that, however idiotic Britt Reid is presented, he is the ‘ideas’ man, whereas Kato is the practical genius. Britt comes up with the ludicrous ideas, unleashed via his stupidity, whereas Kato’s logical genius is his Achilles heel – he can only see the logical side of things, taking Captain Kirk’s ideas and putting them, Spock-like into reality. The yin and yang, the logical and artistic, the right and left hemispheres working perfectly well. It is also great to see what happens to the duo when they are separated, and how they cannot function without the other, falling back into their apathetic ruts from whence they came.

The action scenes are great. The first scene where the duo fights the would-be muggers is excellent, establishing the pairings working/crime-fighting relationship – The Green Hornet is the mouth, and Kato is the fists....and feet and demonstrated in the TV series. Gondry’s bag of visual tricks are well delivered here, delivering a fight reminiscent of The One and The Matrix while putting his own unique, fun spin on it.

There are plenty of nods to the Hornet’s previous incarnations, for instance The Green Hornet’s face mask from the 1940’s Green Hornet serial, Kato’s driving goggles and a sketch of Bruce Lee.

The movie falters however as soon as Seth puts on the The Green Hornet uniform. Instead of a heroic reveal a la Batman, Superman etc....Seth Rogen does not become the character, instead he is simply Seth Rogen wearing a mask. The 60’s television series was akin to the Batman television series although it was played straight and was actually very James Bond cool, especially with the incredibly cool Bruce Lee as Kato. Instead of looking into the character of the Green Hornet, Seth as star and co-writer simply bends the character to suit his on-screen slacker persona.

This movie’s script makes a conscious point to play AGAINST the ‘normal’ interpretation of the classic comic-book hero genre, even making references to the ‘problem’ with other comic-book heroes. The Green Hornet however is a 30’s invention spawned by The Shadow, The Lone Ranger and the same influences that gave birth to Batman. The Green Hornet has many similar facets as Batman: a death in the family leading to a ‘road to Damascus’ moment, a secret hangout, a contact within the police force, a mask, car and side-kick. The Green Hornet and Kato were even paired with the 60’s Batman TV show at one point. To have so many similarities in the first place and then try to play away from type within the same genre is an arrogant mistake.

From the second act, the movie derails. As soon as the duo are in their car, Kato asks The Green Hornet “where are we going?” to which the Green Hornet answers “I don’t know. I thought you knew.” This is a similar problem with the script: the duo become heroes for no real reason other than to have fun, and they get their act together before finding a goal or simply a reason for being. There simply isn't a plot to hang onto.

An action sequence during the day at a building site is also uninspired. The pair’s avatar’s, like Batman’s, do not ‘work’ during the day. To top it off, the unnecessarily convoluted plot and an illogical and muddled ending set-piece is disappointing when compared to the movie’s first fantastic action sequence. When Gondry is not directing a fight scene, the energy is left up to his improvisational comedy star to hit-and-miss the scene pretty much on his own.

The violence is also striking. The film is a cool comedy that young teens can really enjoy, complete with Iron-Man and Batman Begins gadgetry establishing the origins of a hero and his interrelationships with his team-members. Its fun stuff. However, scenes of explicit and cruel violence are quite jolting. The tone therefore is uneven. Digital stunt men are introduced under falling cars, objects and buildings. The camera then, unnecessarily, focuses-in on the dying men’s twitching limbs.

The ‘heroic’ finale is let down by vicious and cruel straight-up murders. I am uncomfortable with hero’s murdering their foe: Batman swore not to use guns or kill people due to his parents being gunned downed, but in the 1989 Batman, he has no problems blowing up a gang along with the Axis Chemical plant with a hand-grenade, dropping the Joker off of a cathedral after telling him “I’m going to kill you” or in Batman Returns shoving a stick of dynamite down a gang member's pants and then giving said gang member a sick smile before hurling him into an open sewer, leading to an explosion. Hell, even Christian Bale’s Batman tells the film’s uber villian in 2003’s Batman Begins “I’m not going to kill you, but I don’t have to save you” and lets the villian to his fate in a crashing train. However, in The Dark Knight, he saves Heath Ledger’s Joker from falling to his death...hmmmmmm............. Iron-Man even shot a group of men in a single shot, and then blew up a tank, presumably with a driver in it. He then reveals himself to be Tony Stark at film’s conclusion. I’m amazed that Iron-Man 2 was not subtitled “Dead Man Walking”. The heroic Optimus Prime in Transformers 2 goes out of his way to hunt and exterminate ‘evil’ Decepticons, and tells his opponent at films end to “give me your face” and then proceeds to rip his face....off. Bumblebee also rips the spine out of a Decepticon puma’s back, but that’s okay see...cause they’re ‘evil.’  It seems perhaps instead of all of these expensive gadgets, such ‘heroes’ should just take a leaf out of Death Wish, save a few bucks and just buy a gun.

I could go on further with what was lacking in the movie, suffice to say all in all, a very mixed effort. A sprawling, unguided comedy, with jolting Gondry camera tricks disturbing the balance. An unfortunately expected result from its troubled production history, something along the straight lines of the original television show or French short film would have been welcome.