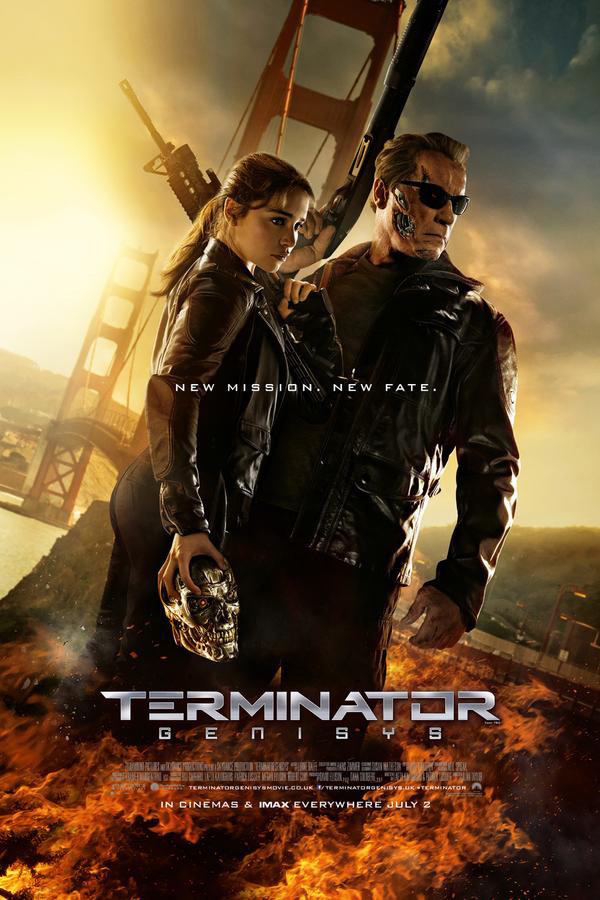 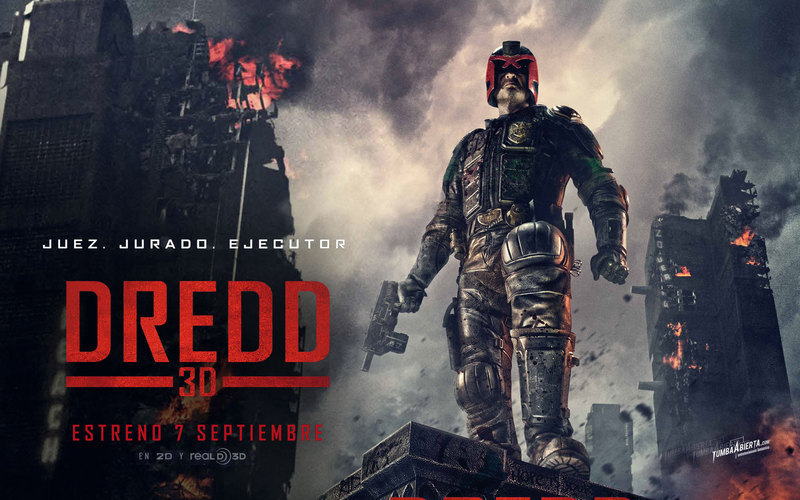 Dredd is a sci-fi action thriller directed by Pete Travis of Vantage Point fame, written and produced by Alex Garland of Never Let Me Go, The Beach and 28 Days Later fame, and based on the 2000 AD comic strip Judge Dredd created by John Wagner and Carlos Ezquerra).

We learn that, in the future, the earth becomes an irradiated waste-land and is now known as the Cursed Earth. Amongst this ruin is a dystopian metropolis called Mega-City One, home to 800 million residents and where 17,000 crimes are reported daily. Gone are conventional police, replaced by lawmen who have the authority  to act as judge, jury, and executioner: The Judges.

In this future we learn that a dangerous new drug, "Slo-Mo" has been introduced to the sprawling populous: the drug bends the perception of the user, so time seems to have slowed  to 1% of its normally perceived rate.

Enter Judge Dredd (played by Karl Urban), who has been tasked with evaluating rookie Judge Anderson (played by Olivia Thirlby), a psychic who has recently failed her tests to become a full Judge. Soon the duo are called to Peach Trees; a 200-story project tower block where three skinned bodies have been thrown from the top tower. Dredd and Anderson respond and are promptly locked within the tower, vulnerable to the drug runners lead by Ma-Ma (Lena Headey of 300 and Terminator: The Sarah Conner Chronicles), and every single tenant of the Peach Trees, where wackiness ensues!

Judge Dredd was first designed based on the image of David Carradine heading the poster of Death Race 2000, a movie set in a dystopian future with a very sardonic sense of humor. Very dangerous racing matches were conducted, where racers earned extra points for any resulting human-road-kill. Coming up with a dystopian future America soaking in social satire, a somewhat fascist character was envisaged to handle the over-populace. Street-cops capable of representing the entire judicial system and expending on-the-spot justice represented by one man named Dredd.

The entire concept was more than an influence on the extremely successful Robocop, from design, humor and social satire. A bigger-than life comic-book creation, drawing parallels with the death and resurrection of Christ, while serving as a metaphorical cautionary tale of capitalism gone crazy. A police officer devoid of humanity but armed to the teeth seemed to be the perfect type of hero, relatively speaking.

The 1995 Judge Dredd starring Sylvestor Stallone movie then seemed like a good idea. Casting none-other than the actor in the movie that originally inspired Dredd in the first place, and having close to a decade on top of Robocop, one would have thought it would have at least stood a chance. Perhaps the popularity of Robocop, and an American audience not familiar with the British Dredd character hurt its chances, especially among an audience not attuned to the satirical nature of Robocop.

95’s Judge Dredd celebrates its comic-strip origins right from the title sequence, littering the screen with Judge Dredd 2000 AD comic-covers, to have the title appear in its original font, albeit a bright yellow. The design is pure pop-corn: a crowded, cramped, colourful Mega-City 1, like a brighter 1989 Gotham City, with comic-book criminals with very big guns. The costume design of the Judges by Gianni Versace have them being heroic and colourful, riding on ridiculously huge, golden motorcycles, dispensing judgement with their high-tech lawgivers. Everything here is glossy in pure 90’s fashion.

The story itself is quite great: delving straight into the social-hierarchy of Mega-City One, into its judicial system and then straight into the heart of Judge Dredd himself, stripping Dredd away from his armour and, most controversially, his ever attached helmet. Getting straight down to his very origin and then versing him against his evil doppelganger, unfortunately the movie loses track somewhere within the second act after a fantastic first, with a third act hurried and unfortunately fizzling out. Not helping matters is giving Dredd a comedy sidekick from Deauce Bigalow’s Rob Shneider. This is however understandable, as a grumbling, silent character going about his business, especially once confined to the wastelands of the Cursed Earth may have halted the movie to a stand-still, but perhaps further thought could have been put into coming up with a compromise, aiding the narrative while maintaining a sense of integrity to the character. That being said, Judge Dredd did have a robot side-kick in his early days which was as irritating as Rob Shneider so perhaps this was quite authentic?

In any case, the original Judge Dredd movie failed to capture audiences. Pure fans were angry that Dredd appeared in a movie sans helmet where in the comic, his face was either obscured by the helmet and, where the helmet was removed, his face was often lost in shadow or comically, a black censorship bar was placed across it. I didn’t mind seeing Dredd’s face however. The purpose of the movie was to strip the character bare and explore him in terms of an origin story. However, perhaps the point of Judge Dredd is not his character at all, but the function the Judges serve in Mega City One. Judge Dredd is simply a stereotype of the model judge: if you need to know what a Judge is about, look no further than Judge Dredd.

The latest movie incarnation began in 2006, eventually shooting in 2010 in the budget-friendly South African cities of Cape Town and Johannesburg with a modest $45 million dollar budget. Whereas the first draft of Garland’s script reportedly dealt with the supernatural foe, Judge Death, it was decided to instead look at the day-in-the-life of Dredd and his function within the city instead, to reel in costs and also to lessen the assumed knowledge needed to fully understand the story. Think an episode of Cops….on slo-mo….

The narrative at the movie’s begging is just enough to entertain, but not to bore us. We learn of this Dystopian Future America, the losing battle the Judges face each day with their war on crime, and of a new drug threat Slo-Mo, a drug that, once taken, slows the user’s perception of time down to 1%. Gone are the comic-book influences. This time around we have a very lived-in, sparse city, with gungey looking vehicles, horrible living conditions, drug-crazed criminals living in slums, and Judges that are encased in well-worn battle-damaged rubber and leather.

Countering this, the effect of Slo-Mo is absolutely beautiful, and should look fantastic in 3D: mundane activities such as smoking become fascinating as the screen brightens and sparkles, and any movement is slowed down to a smooth, organic state. Given the environment that the residents of the Peach Tree live their lives, its no wonder that Drug Lord Ma MA has found quite a market for her drug.

With no further introduction other than he is the one Judge tasked with taking a rookie under his wing, Judge Dredd is introduced into the goings-on, on top of his heavily-modified, but still oversized, law motorcycle to answer a call to duty. From here on, it is pure action akin to a multilevel videogame, shot like a first-and-third person shooter, darting around darkened corridors with danger lurking everywhere, where, once the hero makes it to the top of the structure, he can encounter the Donkey Kong-like super-boss and perhaps the End Game.

New Zealand born actor Karl Urban is better known for his role as Bones in the reboot of Star Trek a few years ago. Here, he is non-descript as Dredd, wearing his helmet and his scowl throughout. Whereas Stallone’s Dredd seemed to be a super-Judge, dressed by Versace, complete with solid, golden shoulder pads and eagle, well respected by law abiding folk and otherwise alike, Urban’s take is an every man’s Dredd, just a pick of the litter dressed as a fully-functional street cop, ready for action in rubber and leathers, face forever hidden by a visage. Perhaps this is a conscious choice, building his legend, and personality, as the film and possible television series continues.

Here and now however, we see a Judge going about his day any other day, strictly adhering to the law without any regard to personal feelings, relationships or personality. Dredd is the model of a Judge in this environment; less an identifiable individual and more of an ideal.

Countering this grim visage is the young and beautiful relative newcomer Olivia Thirlby as psychic cop Anderson. Sans  helmet as it interferes with her super-cognitive abilities, Anderson is a Judge in training, an Ethan Hawk to Dredd’s Densel Washingon a la Training Day. As Dredd is a relative absolute with only an inch of a character arch come the movie’s close, we witness the loss of innocence of Anderson as she accompanies Dredd on her worst day ever which equates to his another-day-in-the-office, raising\sinking to the level of a street Judge.

Olivia does a great job at being both cunning, street-wise, intelligent and vulnerable. Although at times a damsel in distress, Olivia’s Anderson still has a few choice scenes that show that  Anderson does in fact cut the mustard in this hell.

Lena Headey from 300 and Terminator the Sarah Conn0r Chronicles plays Ma Ma, a violent, dangerous and rabid ex-madam drug lord, reigning supreme and at the top level of the project slums tower. Headey gives a level, detached performance which may suit one doped up on illicit substances and detached from the world around her, given her horrendous history of sex and violence. However I would have liked to have seen a little more energy from her ‘evil’ big boss. Where 95’s Judge Dredd was big in spectacle and over-dramatic emotion (thank you Armand Assante) this Dredd reigns it back in. Perhaps again this was a conscious choice to bring the universe crashing back to the ground, akin to Batman Begins after the extravagance of the Schumacher turns; re-establishing the basics to build it all back up again. This time out here are no wise-cracks, there are no fun-action set-pieces, there are no character studies there is only the atmosphere of….dread.

Having loved the original, I still really enjoyed this new interpretation.