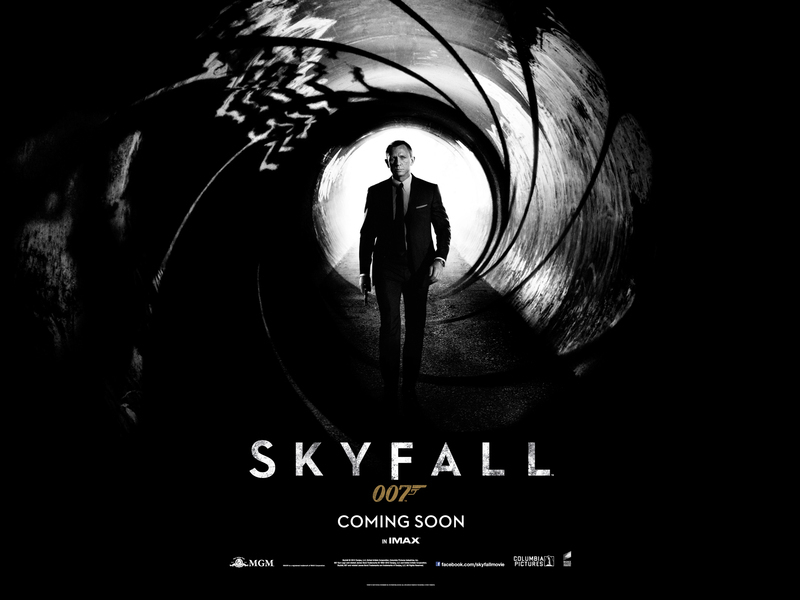 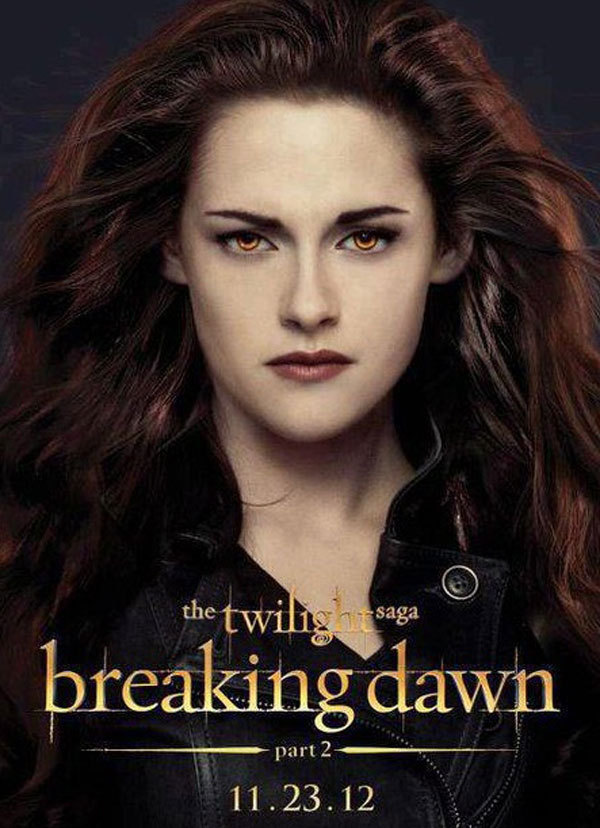 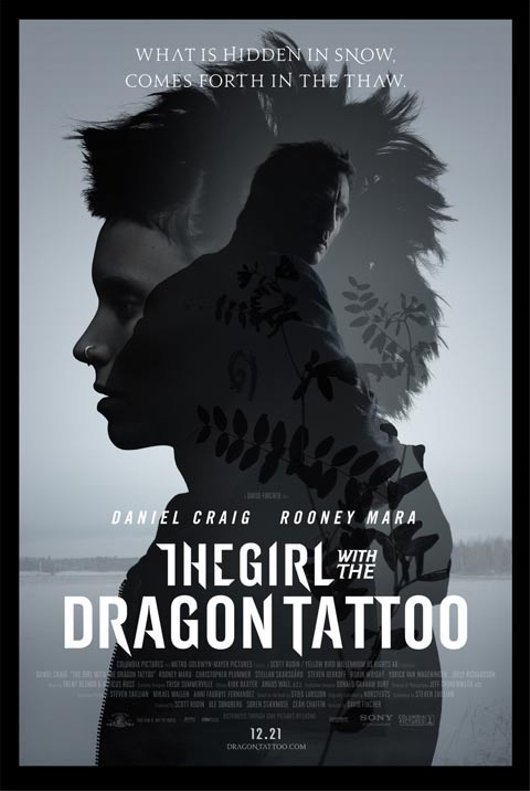 The Girl with the Dragon Tattoo is a thriller directed by David Fincher of Fight Club, last year’s The Social Network and…..ahem…..Alien 3 fame, and is an adaptation of the Stieg Larsson's Swedish novel.

We meet Mikael Blomkvist (played by Daniel Craig), who is an investigative journalist and co-owner of Millennium magazine. Blomkvist  has just lost a libel case against businessman Hans-Erik Wennerström leaving his professional reputation in ruins and facing bankruptcy.

Fortunately Blomkvist is contacted by Henrik Vanger who wishes to hire Blomkvist to solve the 40-year old cold murder of his niece. Eventually Blomkvist finds he needs the assistance of a researcher. Enter the very researcher who performed an extremely thorough background check on him, a young girl called Lisbeth Salander (played by Rooney Mara), who has a dragon tattoo on her back, where wackiness ensues!

I am a huge fan of the Millenium Trilogy, as is already covered on The Movie Club here. I saw the Swedish movie version, and was so blown away by its ambience (cold, isolated cabin-in-the-woods, with only books, laptops and endless supply of coffee for company), characters (creepy suspects) and Agatha Christie closed-room murder mystery that I immediately bought the book and read it cover to cover. From there, I couldn’t stop myself from reading the next book before the movie sequel came out. I only got through the first part of The Girl Who Kicked the Hornet’s Nest before the movie came out, and need to actually finish it off.

Part of me doesn’t want to. Stieg Larsson unfortunately died suddenly after he delivered the manuscripts of his Millennium series to his publisher. Even though the published books form a trilogy, Stieg’s unfortunate passing puts an end to his series, as there is rumored to be four other manuscripts in debatable completion. Ironically, under Swedish law, his de-facto partner has no legal rights to his property, instead his estranged father and brother have the rights to the manuscripts, and it would be up to them as to whether-or-not further adventures of The Girl With The Dragon Tattoo and Blomkvist will see the light of day, in either novel, television or movie medium.

Larsson was an investigative journalist who witnessed the shocking gang rape of a 15 year old girl named Lisbeth. Perhaps through his Millennium series he was trying to pay amends to the incredible guilt he felt at not doing anything to help her. By naming his heroine thusly, and giving her a horrible fate, Larsson uses the Lisbeth character to thwart not only violence against herself, but to other women within Swedish society (victims of sex trafficking), ultimately escalating to a political arena.

The Swedish television mini-series of the Millennium trilogy were cut to film-running time and distributed internationally as a film trilogy. The first chapter was the most cinematic, with the second two installments being helmed by new directors and were given a contemporary, gritty look.

With this American adaptation of the novel (NOT a remake of the Swedish movies), master filmmaker David Fincher is at the helm. His images are beautiful and chilling. Fight Club was perfect, lacing surrealism into a commentary against male identity amongst a material world, Se7en was a gothic, savage tale of sin and redemption, and The Social Network was a tour-de-force of the building of an empire while, simultaneously and ironically, crumbling of close relationships, shot in a dark, isolating Harvard University environment, with soft-focus only pulling their faces into focus.

This new outing for The Girl With The Dragon Tattoo wisely keeps Fincher’s production team from The Social Network, especially Trent Reznor and Atticus Ross who won an Oscar for their soundtrack for Network and at time of writing, also won a Golden Globe for their efforts here. Roony Mara who delivered a very small, but powerfully significant role in Network IS Lisbeth Salander. Gaining the part amongst rich competition including Natalie Portman and Scarlett Johansson,Roony makes the role her own, and we are convinced of such in her very first scene: extremely anti-social,her aggressive body language, distracted but direct manner, and her bold language nails the character.

Daniel Craig is an immense improvement on the Swedish interpretation of Blomkvist, playing against his Bond persona, Craig is a crushed man, saying as much as he packs up and goes to live in an unforgivable location to perform an impossible task that is doomed to failure: a man who welcomes banishment and punishment as consequences for his inattention to detail. All characters are played extremely well, due to the pitch-perfect casting.

The cinematography is what we have come to expect from Mr Fincher: flowing cameras that open up landscapes and then just as easily lead us through rooms. As gorgeous as the tones are, the blacks are very black, with incredible detail to come in the Blue Ray Release.

This is a adaptation of the book which dedicates  more time to the relationship between Blomkvist, Lisbeth and Blomkvists lover Erika Berger (played by Robin Wright). Those who love the books will spot the small differences however, especially in terms of the deduction used to solve the mystery, Lisbeth’s morality, and the extended relationship she shares with Blomkvist.

These are minor quibbles, made to add a director’s flavour and to open up the material to a wider audience. As soon as Fincher’s Girl starts, we can already see that this is HIS interpretation, as the screen is filled with pulsating black oil and tar, forming images foreshadowing the Millennium trilogy to come, amongst a screeching reinterpretation of a Led Zepplin song.  The sequence is almost a perversion of a Bond intro, telling us all and nothing about what is to come. And when it does come, it is pure Fincher; tighter and faster than the Swedish interpretation, with different emphasises on certain events as opposed to the Swedish counterpart. It is great that one can enjoy The Girl With The Dragon Tattoo in all media, as they stand, live and breath on their own, peppered with different perspectives that add to the mix.

The first is always going to be my favourite as it is my introduction to the Millenium trilogy. As I cannot un-watch it now, I perhaps unfairly give Fincher’s Girl - 4.5 tattoos out of 5. Although Tattoo only garnered a modest success, the next two chapters have been green-lit to be filmed back-to-back. I hope Fincher stays to direct the remainder to keep his flavour throughout this new interpretation! 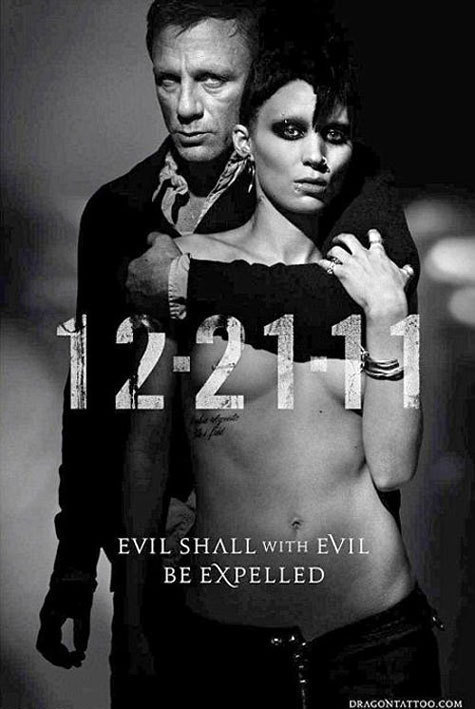 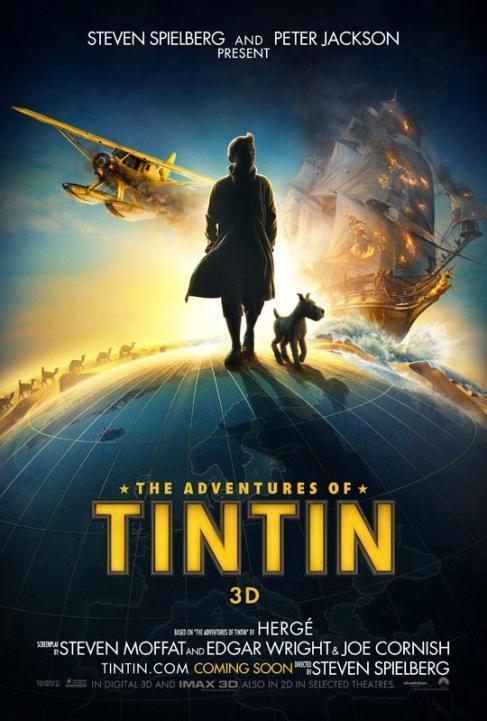 Katy also has a look at the new Australian movie, Birthday.